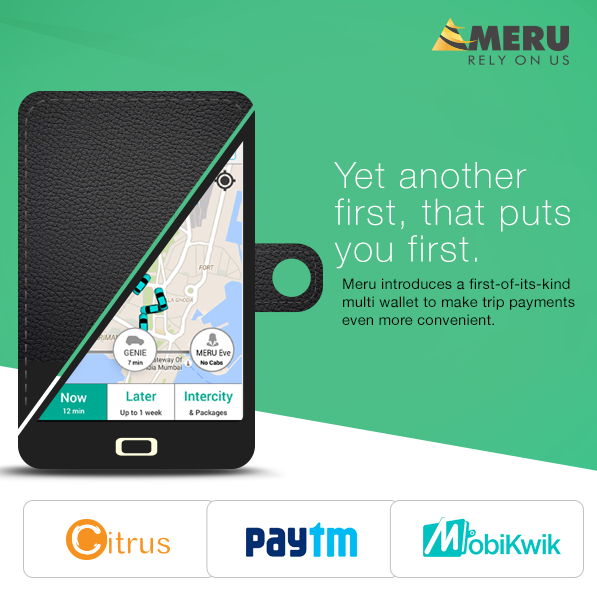 As a pioneer in the cab services industry, Meru has continued to customize services for its customers. With over 70% of its revenues from mobile applications, Meru has digitized itself by offering unique features in its app 'Meru Cabs'. Meru's 'My Wallet' is India's first Cab wallet that enables travelers to store cash for travels and can be used for payment of the trips. Meru had tied up earlier with popular e-wallet, Citrus last year. This revised app with three e-wallet partners is now available for Android Devices, iPhones, Windows Phone and Blackberry smartphones.

Mr. Siddhartha Pahwa, CEO Meru Cabs, on the occasion said, "The Meru Cabs app is the most convenient way to book a cab with just the press of a button. We are very excited to partner with Paytm and MobiKwik. Taxi services are high frequency transaction just like e-commerce and we believe in giving consumers the benefit of choice. Given our new partners dedication and track record, we thought it was perfect to team up with them for this venture. We know that this initiative will prove to be a huge success for all of us"

Bipin Preet Singh, Founder & CEO, MobiKwik says, "Meru has been a trusted brand in the Indian cab-hire market since 2007 and we are excited to extend our wallet to all Meru users. This is a great example of how we will connect over 17 Million MobiKwik users and thousands of Meru users to give a seamless experience of hailing a Meru and paying via MobiKwik; which is an easy, fast and safe way to transact."

How does it work?

To utilize this service, all one needs to is load money in either of the wallets via debit card, credit card or net banking, and at the click of a button the payment will be made. A zero-click checkout system has also been introduced by Meru that works in tandem with the system integrated with the cab. This means one can simply book a cab and walkout without having to pay or even flash the mobile as the amount will be directly debited from either of the mobile wallets. 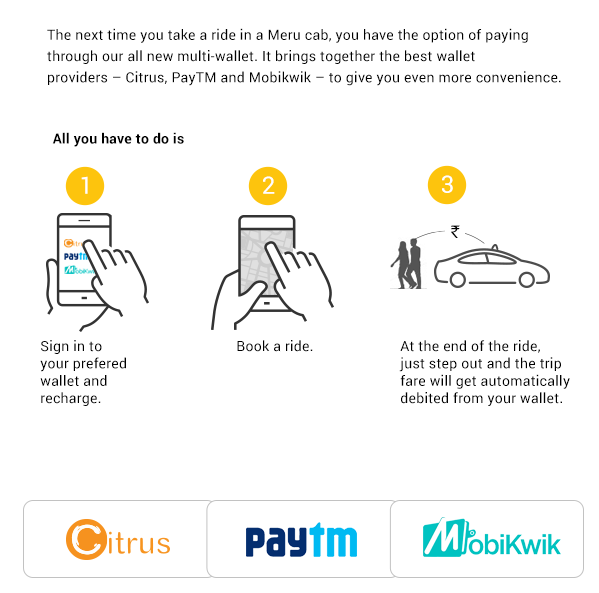 Recently, Meru launched its first national thematic marketing campaign with the tagline 'Ab Haath Na Hilao, Bas App Dabao' highlighting how Meru continues to offer reliable travel experience now delivered via Meru Cabs App. As one of India's most trusted cab services, Meru has always been on the forefront of creating effortless, affordable travel solutions. With a single tap on the Smartphone, a Meru cab can be called from anywhere, to anywhere. To watch the TVC log on to www.merucabs.com/buzz

One MobiKwik Systems Pvt Ltd ("MobiKwik") is India's leading Mobile Wallet company with over 15 Million users and 25,000 merchants (retailers). It's as simple to use as your physical wallet and enables users to transact on both online and offline platforms in a flash. Do recharges, bill payments, shopping and money transfer in the blink of an eye with your wallet. It's very safe to use as well - each and every penny stored in your wallet is well accounted for. You can avail MobiKwik Wallet services on our website as well as on Android, Windows and iOS Applications.

Meru Cabs, a world class cab service was launched in Mumbai (April 2007) in association with India Value Fund, a premier India centric private equity fund. Meru Cab has pioneered the concept of GPS/GPRS enabled cab service in India. Since its launch, Meru has continued to receive an exceptional response from the customers and is consistently distinguishing itself as a provider of superior quality transport. In December 2013, Meru launched its MeruGenie service in Hyderabad, followed by 12 more cities. Now, Meru offers its world-class cab service across 23 cities in India under consumer proposition of Reliability, Safety & Transparency. Recognized by 'The Limca Book of Records' as the largest fleet taxi operator in the country, Meru has completed more than 35 million trips across India. Meru has recently won Economic Times's Promising Brand award for 2015, and UITP 2015's recognition award. It has also been voted as India's Most Favourite Cab Service by TripAdvisor Travellers' Choice for 2 consecutive years 2013 & 2014; and won various other esteemed awards like, Times Travel Award 2011, IT User Award 2008, 2009 & 2010.