Meru Cabs, India's most preferred cab service today announced the launch of its world class services strengthening its presence in Andhra Pradesh. Travelers in the religious city of Tirupati will now have access to Meru's reliable and affordable services through a click on the 'Meru Cabs App' which provides cabs seamlessly. With a fleet of over 20,000 cabs on road across 24 cities and serving over 9+ million passengers, Meru aims to expand its operations in Tier II and Tier III cities this year.

As an important religious centre and a rapidly growing city, Tirupati attracts devotees and tourists from all over India and the world. Backed by superior technology and professional service orientation, Meru's services across Flexi and Genie will offer customers point-to-point service, flexibility to retain the cab, multi-stop Intercity or Intra-city journeys and paying for the actual usage. Meru takes the first step into the Tirupati market with a fleet of 50 cabs and has introduced special packages for local tour drops to Tirumala Tirupati Devasthanam, which are available on call centre bookings. It will provide point-to-point service to commuters at an affordable rate of Rs.10 per km for MeruGenie and Rs. 12 per km for MeruFlexi, the AC cab services.

Speaking on the occasion of the launch, Mr Siddhartha Pahwa, CEO, Meru Cabs commented, "Meru Cabs is moving to key markets with our current fleet of over 20,000 cabs. With rising preference to use radio taxis and customer willingness, Andhra Pradesh has proven to be an ideal market for the radio taxi category. With its strong and growing passenger base of over 9 million, Meru promises to provide innovative products, reliable customer service, safe travel experience and affordable pricing. Meru strives to become the preferred cab service for commuters of Andhra Pradesh".

Meru is offering 15% Cashback on all payments via MobiKwik wallet for the city's travelers. Passengers can book Meru Cabs by calling call center 040-44224422, on website www.merucabs.com or through its world class mobile app (Meru Cabs App) for Android, iOS, Windows & Blackberry phones. The mobile app, with exciting new features includes one touch booking, tracking your cab, confirmed booking up to 7 days in advance and India's first Multi-Wallet cab service. Meru has introduced many pioneering features like 'Trip Tracker' and 'ICE' (In Case of Emergency), especially for the safety of women passengers. Meru also follows a stringent driver selection, recruitment and training process with its Meru Training Academy thereby ensuring all its drivers are well groomed, courteous and knowledgeable. 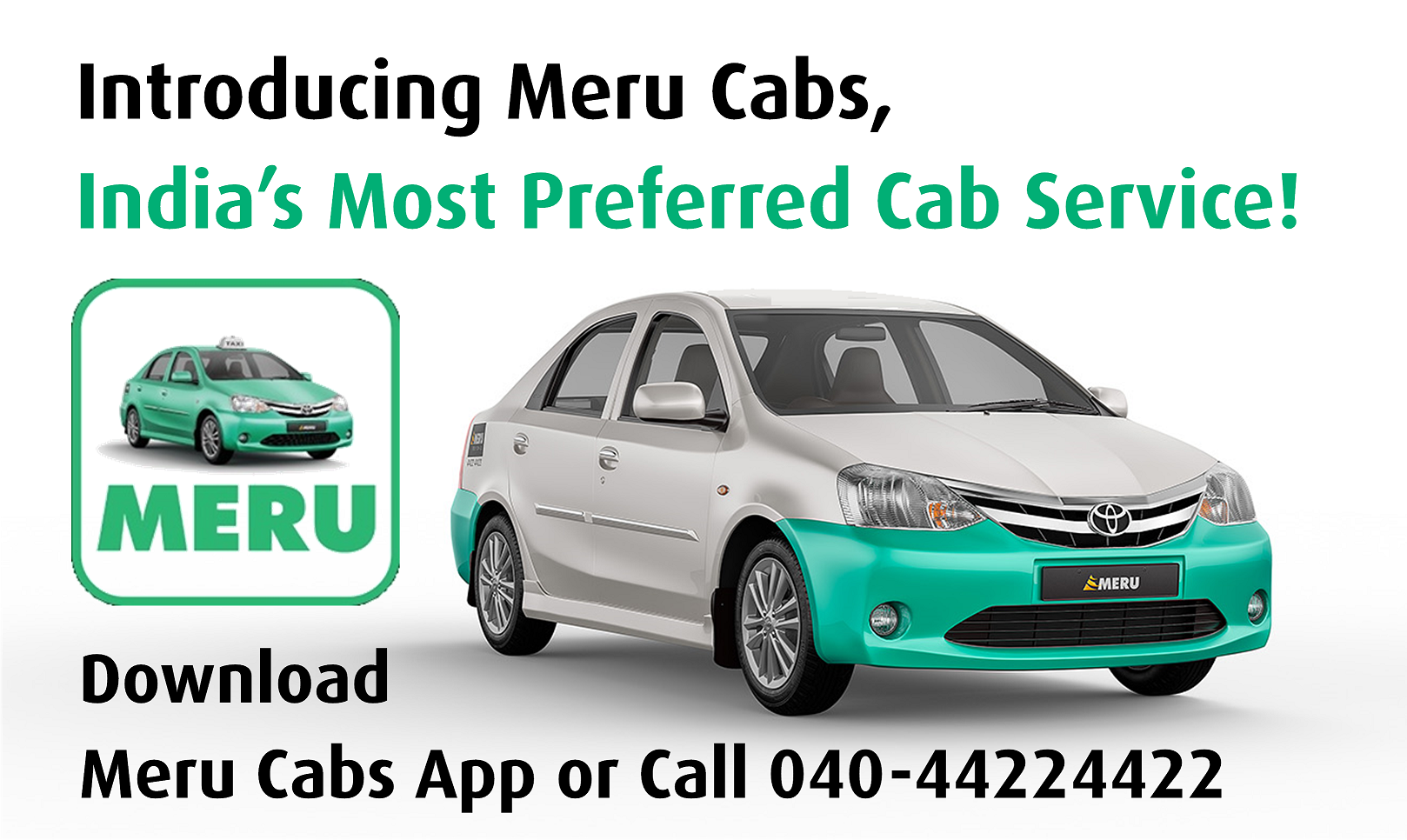