The coastal metropolitan city of ‘Tamil Nadu’ was ranked the 36th most visited city in India in 2019. Chennai was added to the list of ‘UNESCO Creative Cities Network’ due to its deep musical ...

The coastal metropolitan city of ‘Tamil Nadu’ was ranked the 36th most visited city in India in 2019. Chennai was added to the list of ‘UNESCO Creative Cities Network’ due to its deep musical tradition. This vibrant & vivid city is a treat for every traveller. Located on the Coromandel Coast

of the Bay of Bengal, Chennai has emerged as the top-most tourist attraction in India. Chennai was established by the British in 1639 and developed as the political, cultural and economic centre of South India. Kapaleeshwar Temple, Marundeeswarat Temple, Shirdi Sai Baba Temple, Sri Parthasarathy Temple, ISKON Temple & San Thome Cathedral are some of the popular attractions in Chennai. The Ice House or regarded as the Vivekananda House is a pilgrimage for the followers of Swami Vivekananda. Here Swa

India. Kapaleeshwar Temple, Marundeeswarat Temple, Shirdi Sai Baba Temple, Sri Parthasarathy Temple, ISKON Temple & San Thome Cathedral are some of the popular attractions in Chennai. The Ice House or regarded as the Vivekananda House is a pilgrimage for the followers of Swami Vivekananda. Here Swami Vivekananda stayed for six weeks in 1897. Today the place is a museum & is a source of inspiration for everyone. If you are an avid reader then you must visit “The Connemara Public Library” located in Pantheon Road, Egmore. Inaugurated in 1896, you will get to read periodicals, historical & modern-day books. It is one of the four National Depository Libraries of the country. Fort St. George is the first fort built by British in India. Previously called the White Town it was built in 1644. Presently it houses the Tamil Nadu Legislative Assembly & other official buildings. The fort is divided into two divisions- The Fort Museum & St. Mary’s Church. At the museum, tourists can see different artefacts like coins, medals, letters & paintings etc. If you want to spend some time along the coast, visit “Marina Beach” which is a top attraction in Chennai. It is the world’s second-largest natural urban beach. The beach stretches up to 13 km from Besant Nagar to St. George’s Fort. Tourists can enjoy pony rides and visit historical monuments etc. A Meru outstation cab with a driver is the best way to reach Chennai at the cheapest price. Use the Meru app to hire a cab as per your preference. Meru offers different travel and car options as per passenger’s need. You won’t need to worry if you are travelling in a large group as Meru offers different cars like Marazzo, Ertiga and Innova Crysta & you can choose one of them at the time of booking. Passengers can also rent a cab based on different packages & select one way or two way travel option. The driver will call you once the booking is confirmed & you can easily begin your journey Kailasnathar Temple is located few kilometres away from Chennai. It is a marvellous place and has sculptures all over the temple. This 1300-year-old temple has an amazing architecture style & is considered as one of the nine Navagraha temples in Tamil Nadu. Maha Shivaratri, Marghazi Thiruvadirai, Panguni Uthiram and Thirukartigai are major festivals celebrated here. Devotees can visit the temple from 6 am to 11 am & 4 pm to 8 pm. 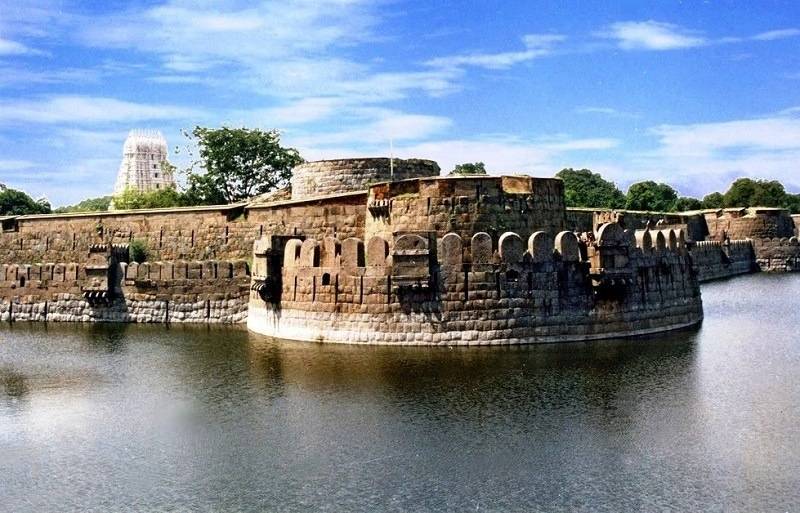 Vellore Fort is a 16th-century fort located in the heart of Vellore city. It was built by Vijayanagara kings and once the headquarter of the Aravidu Dynasty. This is the best place to visit on your journey to Bangalore. It is a perfect place for history geeks and photographers. Krishnagiri Fort is a 17th-century fort built by King Krishnadevarayar of the Vijayanagar Empire. Krishnagiri district is home to several such heritage sites and ancient temples. The fort is one of the significant places located on your journey towards Pondicherry. The best time to visit the fort is from October to March. The fort is under the Archeological Survey of India. Those who like history must visit at least once and be surrounded by many other tourist spots like Krishnagiri dam, Chandra Choodeshwara Temple, Rayakottai Fort. It takes around two hours to climb the fort but the scenic beauty at the top is worth it.

Bangalore, located on the Deccan Plateau, is a well-known metropolitan city known for its IT hub, gardens and parks. It is known for its pleasant climate all around the year. Be it a family vacation o ...

Bangalore, located on the Deccan Plateau, is a well-known metropolitan city known for its IT hub, gardens and parks. It is known for its pleasant climate all around the year. Be it a family vacation or a business trip, Bangalore has everything for all kinds of visitors. The city is full of eateries,

cafes, parks, palaces, museums, pubs etc. There are many beautiful parks where one can spend some time in nature, relax and enjoy. Cubbon Park, located behind the High Court of Karnataka, is a 300-acre green area in the middle of the city. The park has landscaped gardens and a play area. If you are a film geek, don’t miss out to go at Innovative Film City, located on the outskirt of Bangalore. It takes one hour to reach here from the city centre. All you need to do is search “cabs near me”

green area in the middle of the city. The park has landscaped gardens and a play area. If you are a film geek, don’t miss out to go at Innovative Film City, located on the outskirt of Bangalore. It takes one hour to reach here from the city centre. All you need to do is search “cabs near me” on Google or directly book online from Meru app. There are many taxi services, but Meru will take you here at a convenient cost. Innovative Film City offers different attractions like Aqua Kingdom, Dino Park, Mirror Maze, Tribal Museum, Wax Museum, Haunted House and Bigg Boss House etc. Vidhan Soudha, Bangalore Palace, Tipu Sultan’s Summer Palace & ISKON Temple are some architectural wonders in the city. Jawaharlal Nehru Planetarium is another popular place among Science enthusiasts. Here people can get to learn about human life origin, planetary system etc. It is one of the five Nehru planetariums in India. It is open from 10 am to 5:30 pm. Wondrela is known as the best amusement park in Bangalore and India. There are more than 60 rides in the park & has the country’s first ‘reverse looping roller coaster.’ Flash Tower, Maverik, Korneto & Giant Ferris wheel are some of the flagship rides. Bannerghatta National Park, located in “Gottigere”, is a wonderful place to spend time with your family. It houses several animals like lions, tigers, bears etc. Morning is the best time to visit as it is easy to explore the place. There is a lot of NTL call taxi in Chennai but, Meru’s intercity travel service is one of the top-rated in the travel industry, so don’t worry and travel safely with a Meru Cab The magnificent Bangalore Palace is the epitome of fabulous architecture and beauty. It was built in the year 1878, Bangalore Palace is a major tourist attraction for tourists. This extraordinary & spacious palace is spread over an area of 450 square feet. It has a combination of Tudor and Scottish Gothic architecture. The structure of the palace was inspired by the Windsor Castle in England. The palace has a massive garden, hall which is used to organize different events and exhibitions. The palace is situated in the middle of the city and catches every tourist’s attraction at first glance. Though the palace looks European, it also has elements of Indian Culture. It is open from 10 am to 5 pm & costs Rs 230 for Indians Rs 460 for foreign tourists. This 300-acre green space is another major sightseeing area in Bangalore. Bangalore Aquarium situated here is the second-largest aquarium in India. The park was constructed by Richard Sankey. Initially, the park was spread over 100 acres, but later its area was extended to 300 acres. This green paradise is home to more than 6000 plants & trees. Prior it was called ‘Meade’s Park’ but later renamed Cubbon Park. The Lotus Pond, Dancing Fountain, Ringwood Circle, Jawahar Bal Bhavan are some of, the attractions in Cubbon Park. The State Archaeological Museum located here is the oldest in the country. The museum showcases specimens of Vijayanagara & antiques from the Mohenjo-Daro period. Attara Kacheri, Seshadri Iyer Memorial Hall are some prominent structures located in parks premises. The park is open from 6 am to 6 pm. One can reach here by public transport or by Meru taxi. Along with outstation cabs, Meru also operates in major Indian cities including Bangalore. 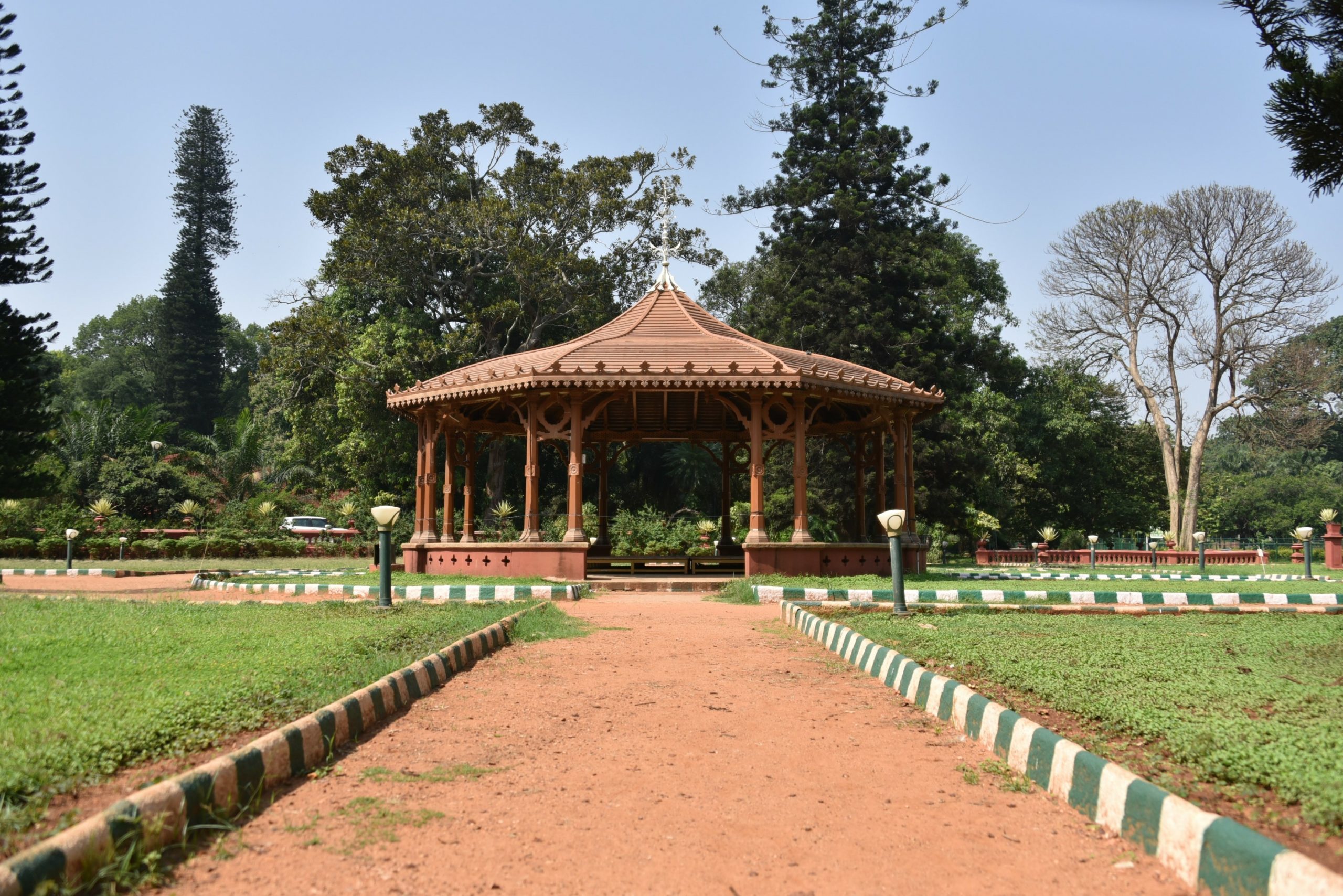 Lalbagh Botanical Garden is home to India’s largest collection of tropical and sub-tropical plants. This majestic place was constructed by Haider Ali and later on transformed by Tipu Sultan. There are around 1800 species of plants, trees and hubs. The Glass House which is inspired by the Crystal Palace in London is a major attraction. There is also a lake in its southern portion & has a bridge and mini waterfall. There are two main events which are organized during Republic day and Independence Day. Hibiscus garden, Kempegowda watchtower, Bonsai garden are some of the other attractions at Lalbagh. The garden is open for people from 6 am to 7 pm. This is the most prominent building in Bangalore which houses the State Legislature and Secretariat of Karnataka. It’s also the largest state legislative building in India. On 13th July 1981, Prime Minister Sri Pandit Jawaharlal Nehru & Chief Minister K. C Reddy laid down the first brick of the building. Its construction got completed in 1956. Visitors need to take prior permission to visit the place. The Government Museum was built in the year 1865, it is a must-visit place if you like history. This archaeological museum has a unique collection of jewellery, sculpture, paintings, coins etc. Some of the major attractions in the museum are artefacts derived from Mohenjo-Daro, Hampi, Chandravalli, weapons used by Kodagu warriors, ancient musical instruments etc. The museum is open from 10 am to 5 pm and is closed on Monday.